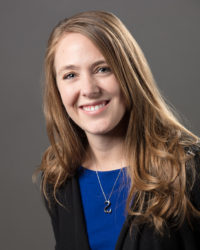 Drentlaw began working at New Market Bank in 2002 as operations officer. At the time, Drentlaw’s father Bob Vogel was running for Scott County Commissioner. It was the intent of the bank’s board that Drentlaw would eventually take the helm of the bank, but those plans moved up when the bank’s senior vice president, who was to serve as president while Drentlaw was further groomed to lead the bank, was deployed overseas.

“I didn’t know how we were going to handle losing a major person from the bank; while he was gone I learned a ton – because I had to. It was a baptism by fire,” Drentlaw said.

“Since becoming president in 2014, when she was just 36, she has led the bank to reach and surpass $100 million in assets for the first time in its 100-plus year history,” said Jim Amundson, president and CEO of the Independent Community Bankers of Minnesota, in his nomination letter.

“Drentlaw’s rise to the top was definitely accelerated,” said NorthWestern Financial Review Editor-in-Chief Jacqueline Nasseff Hilgert. “We were impressed by the sense of responsibility she embodied, and how strategic she was to plan the bank’s move to a new location and expand to add a mortgage department to better serve her growing community.”

Drentlaw was one of seven bankers being recognized in 2018 as a Rising Star in Banking. She was one of only two Minnesotans so honored. A profile of Drentlaw will be available at www.BankBeat.biz in July.

Begun in 1999, the Rising Star in Banking program is one of the most popular regular features appearing annually in NorthWestern Financial Review/BankBeat, which serves the commercial banking industry. Candidates for Rising Stars in Banking recognition must be under 45 years old and can hold any position in the bank, from teller to president. Typically, Rising Stars in Banking have worked in banking for at least 10 years. Successful candidates are bankers who have made outstanding contributions to their bank, industry and community, and are poised to continue to make substantial contributions for years to come. Mid-career bankers working in Colorado, Indiana, Iowa, Illinois, Kansas, Michigan, Minnesota, Missouri, Montana, North Dakota, South Dakota, Montana, Wisconsin or Wyoming are eligible for consideration.

NorthWestern Financial Review/BankBeat reaches more than 3,000 commercial banks in the Midwest. It is published by Minneapolis-based NFR Communications Inc. Additionally, the company produces the CFPBJournal.com, which covers the activities of the Consumer Financial Protection Bureau, and BankBeatData.com, a subscription service that tracks bank performance and acquisition data. NFR Communications also provides management services to the Bank Holding Company Association.

About New Market Bank
Founded in 1905 as the First State Bank of New Market, New Market Bank is an independent, fourth-generation, family-owned bank serving the southern Twin Cities area with offices in Lakeville, Prior Lake and Elko New Market. For over 100 years, New Market Bank has built trusted relationships with its customers through individualized care and attention, comprehensive banking services and a commitment to bettering the quality of life in the communities it serves. New Market Bank is an Equal Housing Lender, Member FDIC. For more information, visit www.NewMarketBank.com.

Board meetings are held the second Tuesday of every month. If there is a topic you'd like the board to consider, please contact Chamber President Josh Malwitz at president@enmchamber.org or 612.888.3556 prior to the meeting. Members are welcome to address the board for the first 15 minutes of each board meeting.
Go to Top